Is Facebook a Social Media Platform or a Translator?

From a social media platform that helps to share and connect one to another, Facebook is now making a huge leap and effort by offering automatic machine translation function on comments made in all other languages into English.

The good news is that this feature is capable of translating various languages such as Hebrew, French, Spanish, Japanese, Thai, and Chinese, you name it. Facebook has successfully rolled out this feature in the late of 2011; however, it has only come to attention by many earlier this year.

Beyond a shadow of doubt, it will definitely be a boon to every user. Hassle of manually translating the comments via Google Translate can now be prevented. An addition of this simple button has made language difference a learning opportunity rather than a language barrier.

For Facebook users who are unaware and have not already tried out the feature, it is powered by Microsoft Bing, another type of machine translator close to the likes of Google Translate. However, machine translation is not flawless. We should not overlook the fact that machine translators only interpret the gist of the content with minimal accuracy.

Machine translators have worked wonder in assisting us to find out the gist of content, however, they should be used with discretion as the translated content may not be professionally sound, most of the time, and hence, definitely should NOT be used for professional and important documents. 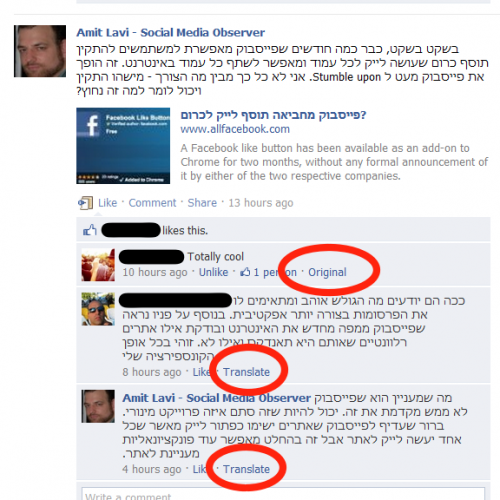 2 Responses to Is Facebook a Social Media Platform or a Translator?