After a month of intense competition, the “Create a Car Decal” contest organized by Verztec Consulting has concluded. The contest received a resounding response of more than a hundred entries, garnering participation from people coming from different walks of life.

The winning tagline was chosen based on the following criteria: firstly, its relevance to the theme “Communicating across languages and culture”. Secondly, the creativity and catchiness of the tagline and finally, the originality of the tagline.

The judging panel consisted of Verztec’s CEO Mr Nicholas Goh, Director of Global Operations, Ms Jenny Woon and Marketing Manager, Ms Carrie Chen. The judges had a hard time identifying a winner as the contest received a great number of quality entries. Nevertheless, after several rounds of discussion, a winning tagline was finally singled out.

The winning entry was awarded to Chen Junwei with the tagline “Languages Drive Us Through Cultures”. Junwei will also receive the prize money of $200 in cash. 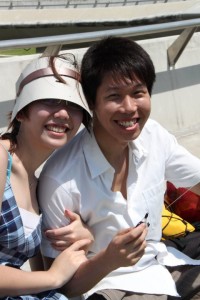 This entry was posted in Social Media, Verztec. Bookmark the permalink.