With 550 million registered users and counting, Facebook already been translated and localized into 65 different languages, one might think that Facebook had spent a great deal of money in localizing their content; if you are one of those who thought so, you are so wrong.

On the contrary, to embark on their global presence, Facebook launched an application called “Translations” and through this application, the tedious process was crowd sourced, allowing the millions of Facebook users worldwide to participate in the translation process.

Within a few weeks, Facebook managed to release its first ever localized version in February of 2008 when they launched their Spanish site.For the months to follow, volunteers from all over the world had utilized this application to help translate the social network into every other major language in the world. 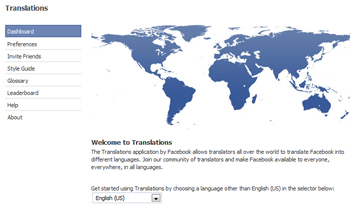 After seeing the success of “Translations”,Facebook did not just stop there,instead they continued their global mapping on the other sites and applications across the internet; as long as the site or application uses Facebook Connect, they will be able to leverage on Facebook’s global community in getting it translated into any language that Facebook Translations supports.

This move by Facebook would have epitomized Facebook’s philosophy “Giving people the power to share and make the world more open and connected” but on the flipside, Facebook is at the same time patenting this crowdsourcing translations process which had helped transformed them into the global entity they are today, seeking to profit from other networks that are thinking of using similar method to localize their content.

This entry was posted in Social Media, Web and Technology and tagged crowdsourcing, Facebook, Translation, Website Localization. Bookmark the permalink.