The shrinking of wealth gaps and the prevalent availability of education and technology in recent years has resulted in an influx of emerging markets, as some of these markets remain relatively untapped; it provides significant potential for business opportunities.

In today’s blog post, we will be looking at Russia, a land of mystical culture and rich history, although Russian has successfully moved to become a market-based and globally-integrated, there is still a stigma in the minds of many that Russia is still the war torn and globally-isolated country it was.

Geography
At 17,075,400 square kilometres Russia is the largest country on earth, extending across the whole of north Asia and 40% of Europe and spanning over 9 time zones. With a wide natural resource base, including major deposits of timber, petroleum, natural gas, coal, ores and other mineral resources.

The 140 million people living in Russia makes it them the 9th most populous nation in the world.

Economy
Russia is a nation with an enormous natural resources, particularly oil and natural gas, and Like most major economies, the Russian economy took one of the hardest hit in the 2008-09 economic crisis,  Oil prices were plummeting and the foreign credits that Russian banks and firms had previously relied on has dried up.

However in 2010, Russia has already seen a sharp recovery in their GDP growth when commodity prices stabilized, and according to many financial experts; notably the International Monetary Fund, they have forecasted that the Russian economy to grow 4.25% after falling 7.9% last year.

As compared to most developed nations, Russians have comparatively lower wages but they are generally highly qualified; thus this provides a good ground for international brands to leverage on the Russian workforce.

With Russia’s economy growing on an average of 7% since the 1998 Russian financial crisis, it has resulted in the doubling of disposable incomes and the emergence Russia’s middle class, this as a result has provide a ready consumer base that is willing to spend on quality goods and services, thus providing great investment opportunities for international brands, notably luxury brands.

Language
Russian is 7th in the World’s most widespread Language, besides Russia it is also spoken in many other countries such as Belarus, China, Estonia, Georgia, Israel, Kazakhstan, Kyrgyzstan, Latvia, Lithuania, Moldova, Mongolia, Turkmenistan, Ukraine, U.S and Uzbekistan. 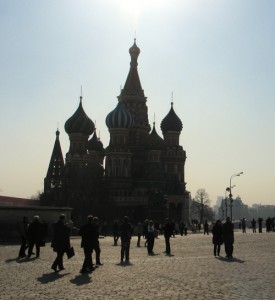 Saint Basil's Cathedral is a showcase of medieval Russian architecture.

Although the English language is quite commonly used in business context; putting in the extra effort to learn Russian will bring you a long way in gaining the trust of Russian business partners and it’s also strongly recommended to at least learn the Cyrillic alphabet so as to help you get around the streets of Russia.

Culture
Think Russian culture and probably The Nutcracker, a masterpiece of the great Russian composer Tchaikovsky would come to mind.

The Russian Culture is essentially a hybrid of both European and Asian culture and can be considered one of the richest cultures in the world. With its diverse forms of arts, music and literature, Russian Culture has also strongly influenced many other world cultures.

This entry was posted in Emergent Markets and tagged markets, Moscow, Russia. Bookmark the permalink.