Continuing on our profiling on emerging markets, today’s blog post will focus on Brazil, a nation where many will know as a great footballing nation, having won the world cup 5 times and for generations they have been producing some of the best footballers on the planet, from the legendary Pele and Zico in the 60s and 70s to the likes of Ronaldo, Ronaldinho and Kaka in recent years.

Putting football aside, not only is Brazil a champion in football they are also a resource-rich democracy that is growing steadily and they are being considered one the most if not the most attractive emerging market.

Brazil will soon have the chance to bolster their reputation of being an emerging power to become a true economic powerhouse, as they are going to host what is considered 2 of the most important sporting events in world sports,  The FIFA World Cup in 2014 and the Olympics in 2016.

These few years till 2014 and 2016 are the most important years for Brazil’s overall development as the entire planet would be focused on them.

They are one of the few energy-independent countries in the world; having the largest supply of fresh water in the world. In which, many experts had predicted that the value of water might one day overtake that of oil.

Due to its strong economy and a stable currency, Brazil was barely affected by the global recession, as their GDP dropped only by a mere 0.2 percent, moreover in 2010 experts had expected their GDP to grown from 4.5 to 6 percent.

Brazil’s newfound stability has successfully elevated the status of millions of poor Brazilians, lifting them into the middle class. This had provide golden opportunities for investors to penetrate on this previously untapped market, as now with their new found wealth, more Brazilians are willing to spend on quality goods

One area that is booming in due to the emergence of the middle class is its technological market; In terms of PC sales market, Brazil has overtaken countries like Germany to become the fifth-largest computer market in the world. It’s also a hub for banking technology and open-source software.

One key investor in Brazil’s booming technological market would be Google, Brazil is Google’s stronghold for its search and Gmail businesses and its one of the only places where Orkut, Google’s social-networking service is a leader.

Language
The official language of Brazil is Portuguese, which is spoken by more than 99% of the population. As for the written part, Brazilian Portuguese differs significantly from the spoken language as they follow different sets of rules as followed in Portugal.

As a result, foreigners who speak fluent Portuguese would have difficulties in writing Brazilian Portuguese properly.

Because of Brazil’s size, self-sufficiency, and relative isolation, foreign languages are not widely spoken; and although English and Spanish is bring learnt in schools, businesses would be strongly advised to properly adapt their products to that of Brazilian Portuguese if they were to stand a chance in competing in the vast Brazilian market. 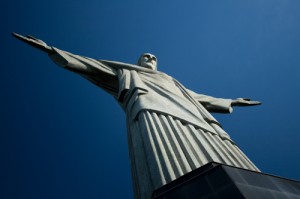 The Christ the Redeemer Statue in Rio De Janero, a symbol of Christianity and an icon of Brazil

Culture
The core culture of Brazil is essentially derived from Portuguese culture, because of its strong colonial ties with the Portuguese empire.

Among other influences, the Portuguese introduced the Portuguese language, Roman Catholicism and colonial architectural styles. Some other aspects of Brazilian culture were influenced by the contributions of Italian, German and other European immigrants who arrived in large numbers in the South and Southeast of Brazil