Jose Mourinho – The Coach of the Decade, The Special one and The Translator?

Many of you know Jose Mourinho as one of the best football coaches in the world. Nicknamed “The Special One”, he is currently managing Real Madrid, and has helped clubs like Porto, Inter- Milan and Chelsea to the highest honor. However, not many people know that he actually started off his career as an interpreter.

It was during the year 1992 when the late Sir Bobby Robson was the head coach for Sporting Lisbon in Portugal. He needed the assistance of a coach who was well-versed in both English and Portuguese and Jose Mourinho was the perfect fit.

Jose Mourinho speaks Portuguese, Spanish, Italian, French and English fluently and he also knows Catalan. He started learning the various languages due to the fact that the knowledge he required as a student was only accessible in languages other than his native Portuguese.

After a couple of years in the Portuguese league, Jose Mourinho soon found his way over to FC Barcelona of Spain, one of the biggest football clubs in the world when Sir Bobby Robson was appointed head coach there.

While working for Sir Bobby Robson at Barcelona, he learnt Catalan and famously quoted that he found it impossible to work in a country in which he did not know the language. 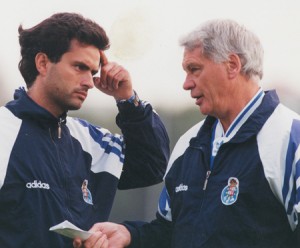 Jose Mourinho seen here with Sir Bobby Robson, during his stint as an interpreter

Jose Mourinho was once again reminded of his roots as a translator when he went back to FC Barcelona in April of 2010, he was then the coach of rival Italian football club Inter-Milan. Unhappy by their team’s loss, FC Barcelona fans started to hurl abuse at him, calling him “El Traductor” (the translator), suggesting that he was a nobody but a lowly translator.

I would beg to differ from the statement that the FC Barcelona fans made, as it was in fact during his years as an interpreter that Jose Mourinho got the chance to learn from the best in the business, something that has attributed to his current success.

From Jose Mourinho, we can see the advantages of being well-versed in several languages which had opened up doors of great opportunities for him.

This entry was posted in Communications, Language, Translation. Bookmark the permalink.

3 Responses to Jose Mourinho – The Coach of the Decade, The Special one and The Translator?